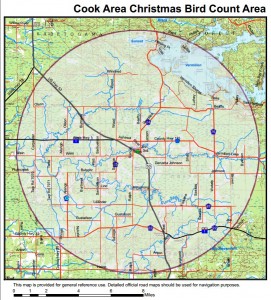 Did you know that this year will mark the 115th year that the Audubon Society has been conducting Annual Christmas Bird Counts? This count is the longest running Citizen Science survey in the world and provides valuable data on bird populations across a wide geographic range. Prior to the turn of the century a holiday tradition known as a Christmas “Side Hunt” had gained popularity here in America. After the Christmas feast, teams would be chosen and they would go afield with their guns. Who ever brought in the biggest pile of feathered (and furred) quarry won. It was about this time also that observers and scientists were becoming concerned about declining bird populations. In 1900 Frank Chapman, an ornithologist proposed a new holiday tradition of a Christmas Bird Census. Birds would be counted rather than hunted. The idea caught on and here we are at the 115th year.

In Minnesota the first count was conducted in 1905. One count was held in Minneapolis where they noted 8 species. Another was held in Red Wing where they saw 7 species. Things have come a long way since that first year. Just here in this state there will be close to 75 Christmas Bird Counts this year. The MOU or Minnesota Ornithologists Union coordinates with the Audubon to organize this event. Each count takes place in what is called a “count circle”. This is circle on a map with a specific center point that extends out 7.5 miles in all directions. 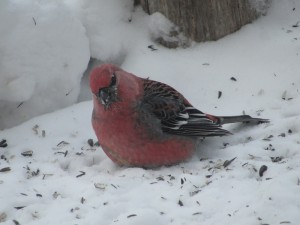 In 2002 a woman and avid birder by the name of Charolette Jacobson started a count circle here in Cook. The center point of this count circle is the junction of HWY 53 and River Street. Charolette and her husband Gerry coordinated the Cook Area Christmas Bird Count for several years. Unfortunately Gerry died unexpectedly and Charolette chose to move out of the area to be closer to family. Bill Conger kindly took over for the Jacobson`s. This year he has decided to pass the hat on and I have agreed to take it. The Cook Area has been censused 13 times and 18,928 birds have been counted. Looking back at the records I noticed total number of species counted ranged form the the low 20`s to 30 in 2005.

This years Cook Area Count will take place Dec 27th. If you would like to participate please give me a call at 218-666-2450 or send me an email at [email protected]. Those of you who reside in Field Township have the luxury of simply counting birds that come to your yard/feeders as the township is in the count circle. Anyone feeling more adventurous who might be interested in driving a route or hiking a trail just let me know. It can be a lot of fun and an opportunity to learn more about birds that spend their winters in our neck of the woods.

Happy Holidays to all,  Julie Grahn