Looking to the Past; Looking toward the Future

Field Township:
Looking to the Past; Looking toward the Future

The beautiful white church in Field Township, called the Little Fork Church, held its first service in April of 1917. In 1947, that church merged with Trinity Lutheran Church in Cook, so no more Sunday services were held there until 2014, when Trinity started holding an annual service on the 2nd Sunday of September.

During the intervening years, the old church building and the surrounding cemetery became the property of Field Township. Many of the settlers and recently deceased people, are buried there, and a few years ago, Field purchased additional acreage so that the future generations won’t run out of cemetery space. The building, although soundly built, started showing the effects of time. In recent years, Field Township has had the foresight to preserve this beautiful old building. They have put on a new roof, siding, new doors, some new windows, and inside, they had new sheetrock installed on the ceiling, and the interior has been painted. Obviously none of these improvements has been cheap, but they were done to maintain the building for the future generations.

In 2014, one hundred years after the building committee for the Little Fork Church was up and running, people of Trinity Lutheran Church of Cook helped with clean-up of the interior so that a church service could be held there. In the attached photo, please note the bare and dirty wall behind the altar. People started speculating about the possibility of having a reproduction of the original altar painting made for that wall. The original altar piece had been brought to Trinity to preserve it from the elements. This painting was originally purchased by the Little Fork Lutheran’s Luther League.

Speculation turned into action. Cook photographer Ian Carlson took a high quality photo. The Field Township board researched how to get this reproduced and how to get it hung in a respectful manner. Rural Cook woodworker, Dennis Carlson, built a reproduction of the original frame. The frame, as well as the altar rail and pulpit, were repainted to match the original design. The photo, printed on aluminum, is said to last 100 years, and it cost $900. The solid wood, 400 pound frame and supplies, cost approximately $1600. It was installed on 9/9/2017.

The results of all this work have exceeded our expectations. It is beautiful. The building and its history will be preserved for many years. Due to the religious nature of the photo/painting, we would like to solicit donations toward this project. Please consider donating a small, medium, or large amount of money toward this expense. Make checks out to: Field Township, memo line: Little Fork Church, send to Pat Chapman, Field Township Clerk, 9998 E Lind Rd, Angora, MN 55703. Donors’ names will not be published. Several people have already pledged to help with this project.

This fund raising effort is in no way connected with Trinity Lutheran Church. It is solely for the historical preservation of the building at the Field Township Cemetery. 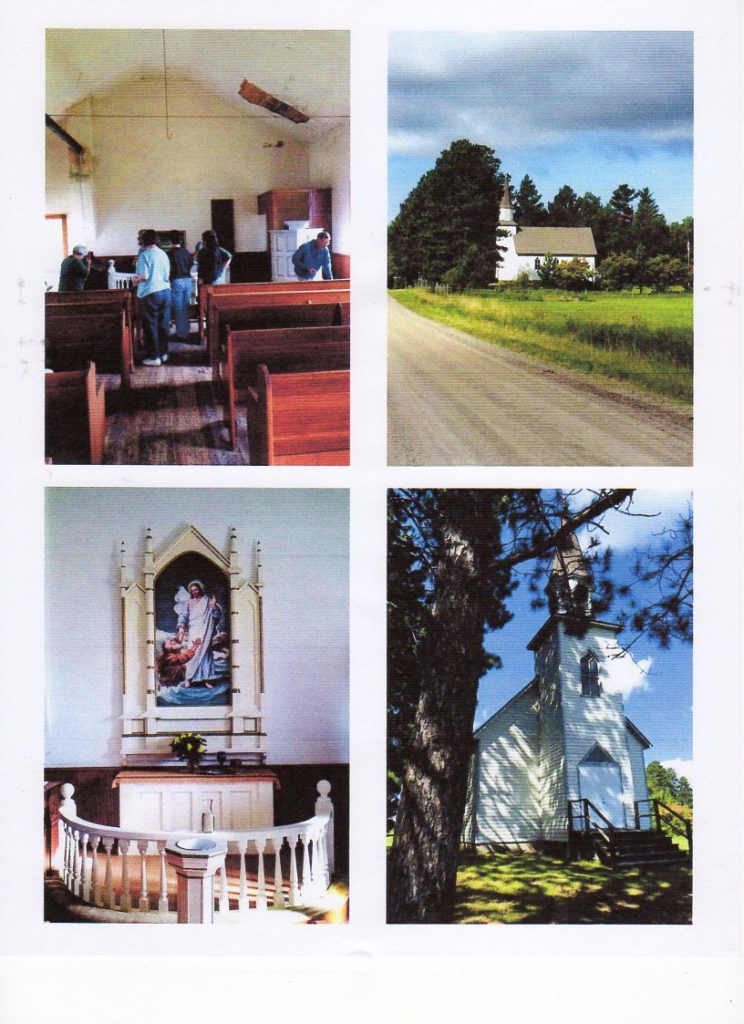